Listen Up!
Hearing versus Listening: A Distinction in Being Human

Have you ever been “deep in conversation” with someone—whether an old friend or business colleague or someone you’ve just met—and have had absolutely no idea what they were talking about…because you weren’t listening? Think of all of the moments that have gone by in your life—personal and professional—where you may have passed up on valuable information: instructions on completing a task, a different approach to reach a desired goal…someone saying “I love you”. Priceless information that could potentially be life changing…and, even if we pretended to…

David Anania (Blue Man Group, Della Miles, MamaMiaMusic) draws from a unique blend of music, life experiences and hands-on participation to create a clearing for understanding the difference between “hearing” and “listening” and how we, as human beings, can become present, engaged and inspired by potential from the countless connections that we experience in our everyday lives. 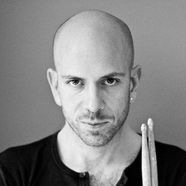 David Anania — drummer, singer/songwriter, producer—has been a member of Blue Man Group since 2000 (NY, Berlin) and has performed with BMG all over the world, including: Wango Tango Music Fest (2001, Dodger Stadium in front of 45,000 people), Moby’s Area II Tour (2002, w/Moby, David Bowie and Bustah Rhymes), The Complex Rock Tour and The Royal Variety Performance (in front of Queen Elizabeth II). In August of 2010, David co-wrote drum music for Blue Man Group’s world premiere performance of “We Are One“ a composition by internationally renowned DJ, Paul van Dyk (o2 Arena, Berlin).

David is also an accomplished composer in his own right, having completed his solo EP “Reinvent the Feel“ in 2010 and, in Autumn of 2012, scored, performed and produced the original soundtrack for the full-length documentary, “Return to Pearl“ (Snap 180 Media). Outside of his rhythmitizing for Blue Man Group, David drums for Della Miles (Whitney Houston) and Jaimi Faulkner (2008 Australian Blues/Roots Performer of the Year) and is a sought-after solo-drum performer (“Timetraveler“ Performance) and clinician for DrumCraft Drums, Roland V-Drums, Paiste Cymbals and Vic Firth Drumsticks.

Since June of 2009, David has been orchestrating successful Team Building Events throughout Western Europe, combining his specialized musical and leadership abilities to create an atmosphere where a group of people can come together, leave their inhibitions at the door and boldly go where no other team has gone before.